Be warned – this is going to be a super long post. More like how it was like when I started my blog many many years ago…

I am turning 37 soon. If most people live to their 70s-80s, it means that I’m middle age. Middle age is a period when people have enough experiences to look back on their lives to meaningfully do an analysis on fond memories, regrets, and appreciate their past and present better. When I was in my 20s, I didn’t think that my secondary school days could bring as much goosebumps to me as I feel now when I look back. What would I have done differently? For someone who didn’t used to believe in regrets, it is shocking that I do now for some of the choices I made in my life. In any case, it made me want to make things right. And giving back to my alma mater seems like a 101 module I can start off with.

The alumni committee contacted me to compose and produce a song for RV’s 60th anniversary back in mid 2015. Truth be told, RV was the best experience of my schooling life (I bet secondary schools are the best for many people because real and lifelong friendships were made from there). Hence I was very eager to be part of this song production project for my alma mater. What a brilliant way to give back!

We roped in Regine Han from indie band LGF to pen the lyrics and the melody for the verses (I composed the melody for the choruses). Wearing the hat of the music producer was exciting but daunting too, because I’ve never worked with any of them! In the end we decided on having Jiujian 玖健 (veteran in Xinyao music), Tay Sia Yeun 郑夏韵 (Voice of China Season 3 top 6 finalists), Edric Hsu 徐隆 (veteran singer & actor; most recent musical being “Beauty World”); Yeo Cheng Rong 杨承融 (current RV teacher and alumni teacher representative)…and me!

Hear the song 《青春彼岸》here (produced by my Storyteller Wave Productions!):

On 16th Jan 16, my classmates and I went for the banquet. I was really looking forward more to catching up with them rather than performing the song. I remember we were on a group chat, and one of them said “ok i’ll wait for you at the posters area“. I walked over, and this man walked toward me with his hand reached out to shake mine. I was like… “Don’t tell me you are xxx…“… because I couldn’t recognise him at all!!!! I was stunned (like a vegetable) for a good 5 seconds, trying to look for features that I could recognise…

There were too many fond memories of RV… Ncc drills, camps, mass showers and the oily air rifle sessions; home economic sessions with my bland or burnt food and weirdly sewn culottes that I think nobody in the right mind would wear; squabbles with male classmates whom I think were simply immature/childish (on hindsight, they were just acting their age!); the never-ending assembly sessions because the principal just went on and on and my ankles were hurting from prolonged cross-legged sitting; remarkable teachers who were stern but very caring (and of course teachers who unfortunately were teased mercilessly by us, complete with nicknames……… behind their backs of course muahaha).

Most importantly, my passion for music took on another level when a few of my classmates and I won Talentime (we even grabbed the Most Entertaining Group award!). Other than learning more about harmonising, it really gave me a pat on my shoulder. I had wanted to be a singer for the longest time…. and RV was pivotal in that decision.

Photos time! Can you imagine that my class chairman kept this name list for 20 years? 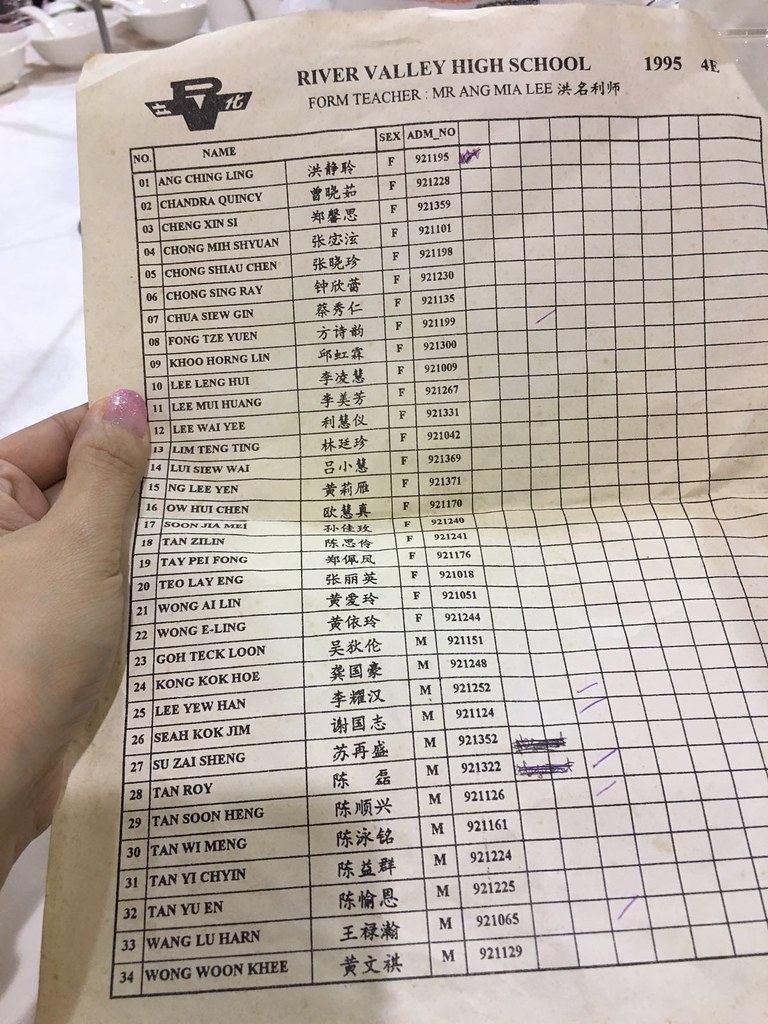 There were classmates who were living overseas, classmates whom we had to guess based on their dialect names, hell, some of us couldn’t even find our own names! 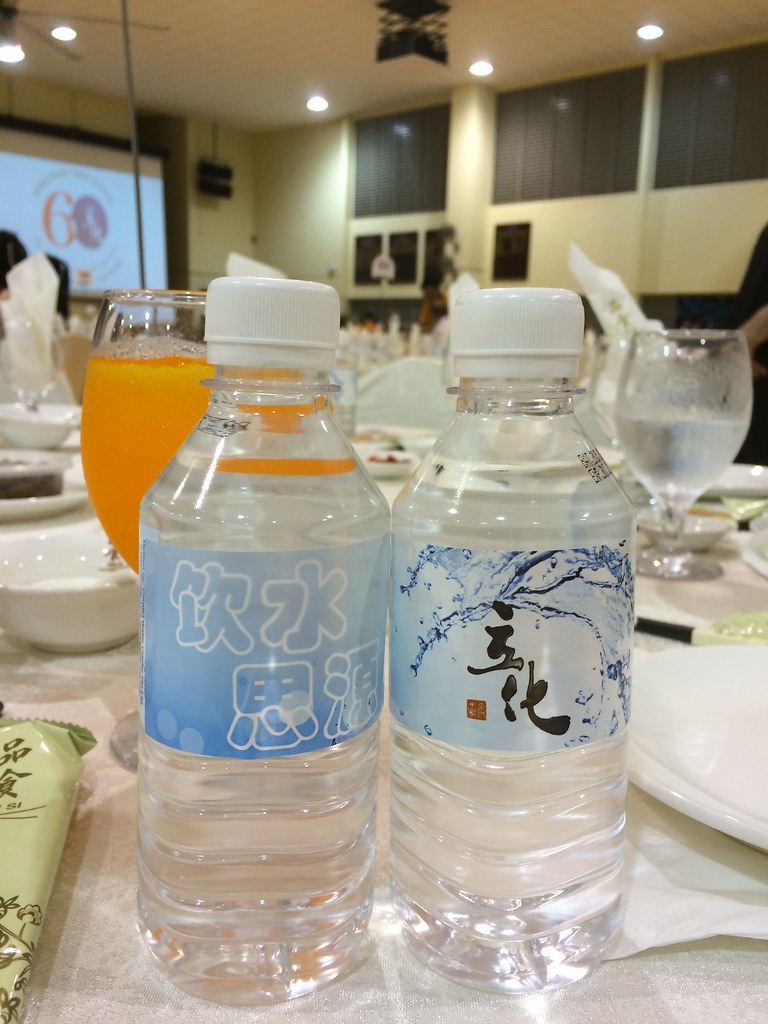 I was walking in the hall when someone called out to me. I turned and saw a man whom I do not recognise (again!). When he mentioned his name, my world spun a little. Because I should remember him since we had met some years back (as opposed to 20yrs). Oh no. There’s a reason why I’m called Ms Amoeba! Ok I love surprises, but all these are making me feel stupid leh! Meet Qing Xiang my Sec 1-2 classmate. I keep thinking he looks like the Malaysian singer Ah Niu （阿牛). 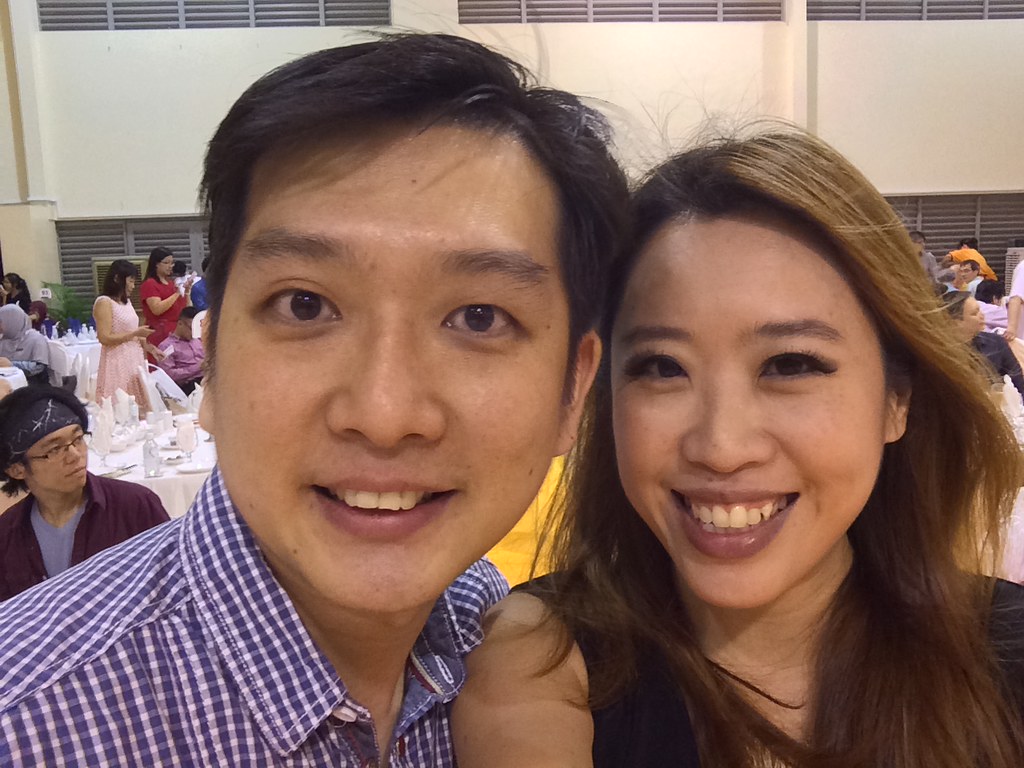 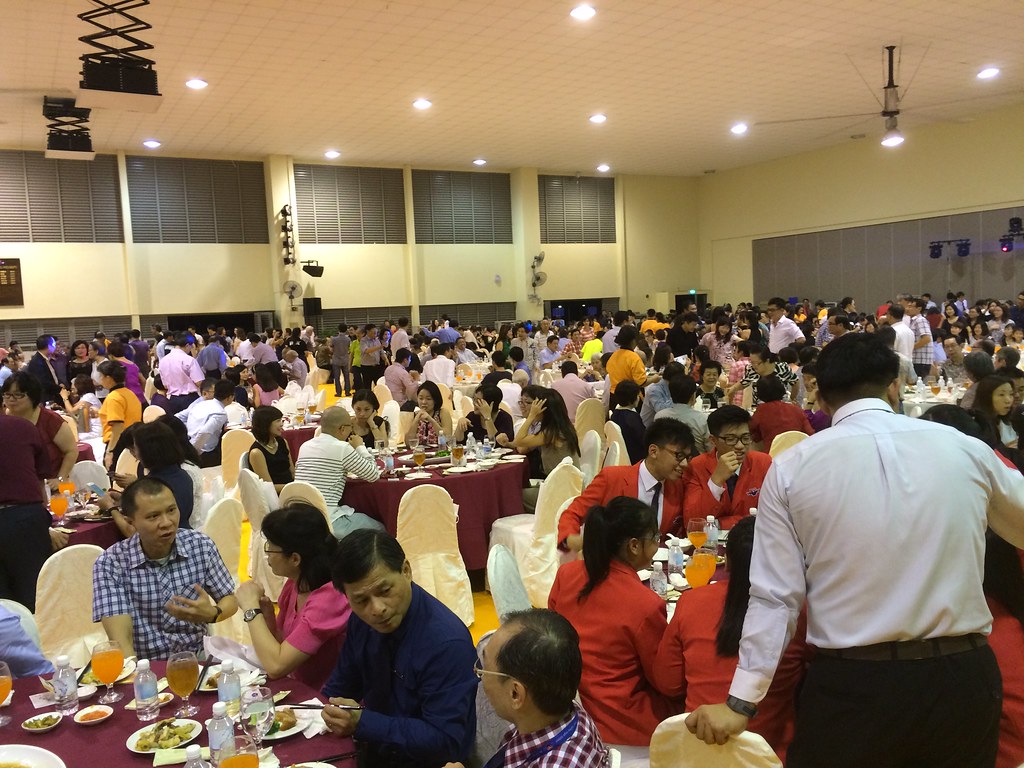 Photos with just the ladies: 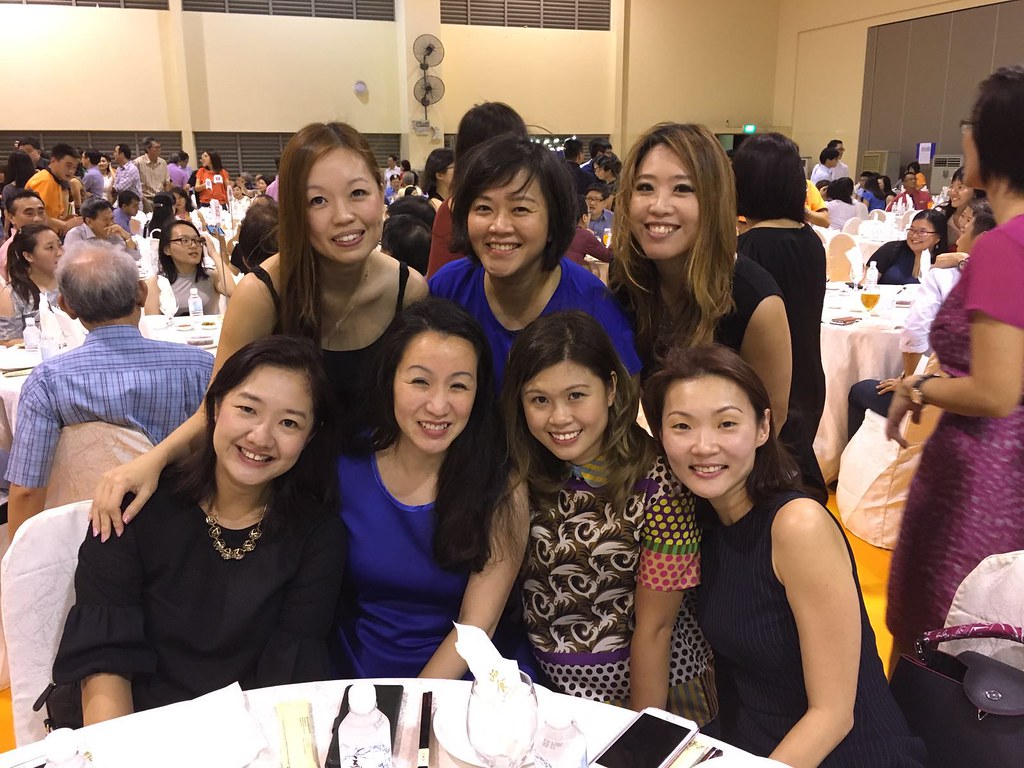 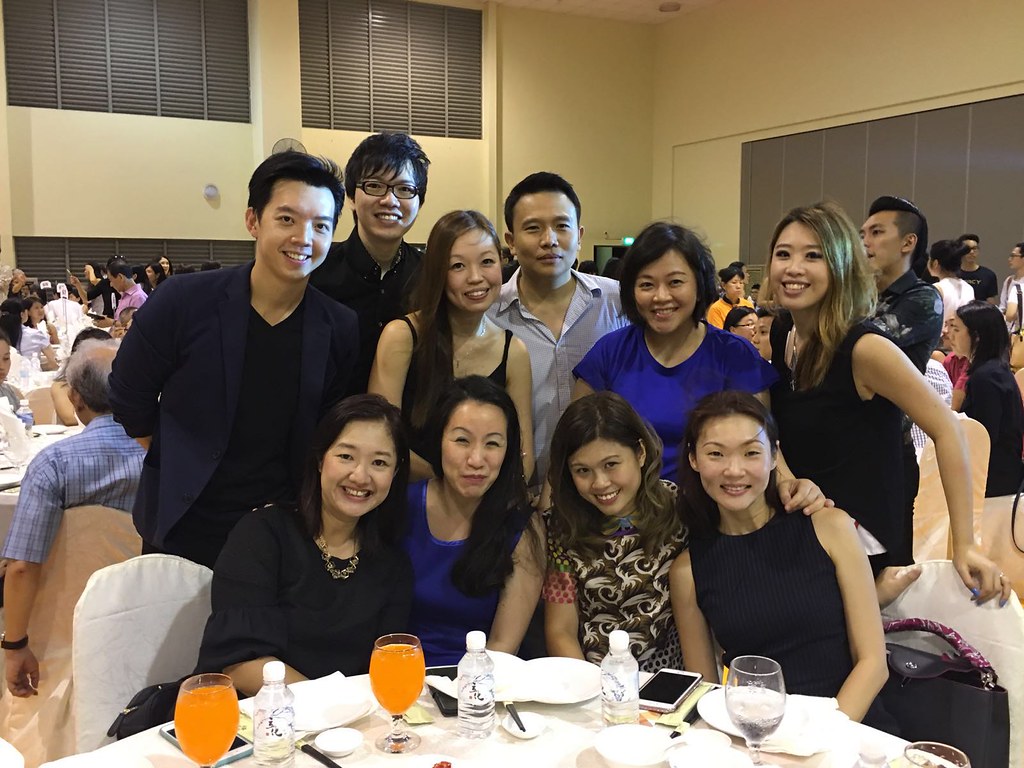 And finally when our form teacher Mr Ang Mia Lee came over! We were his 1st batch immediately after his NIE training. He’s also from RV, so that gives him a 24 years mileage in RV! Goodness me! 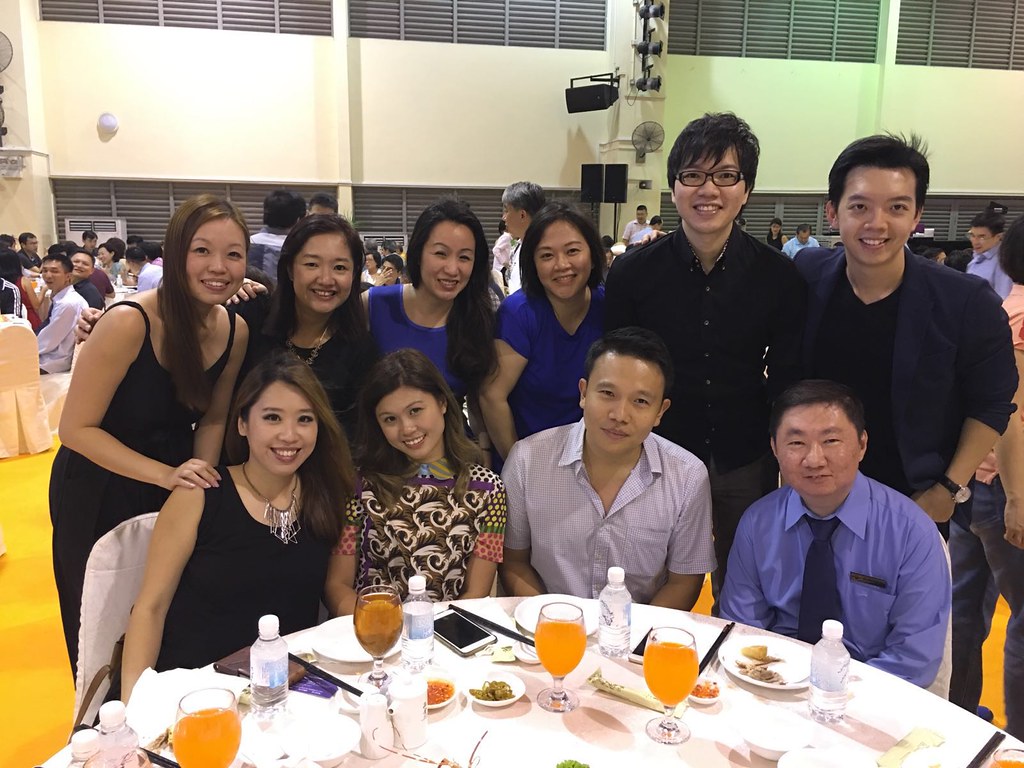 This birthday card that was kept by my class chairman for 20 years brought us so much joy. We wrote so much stupid things! 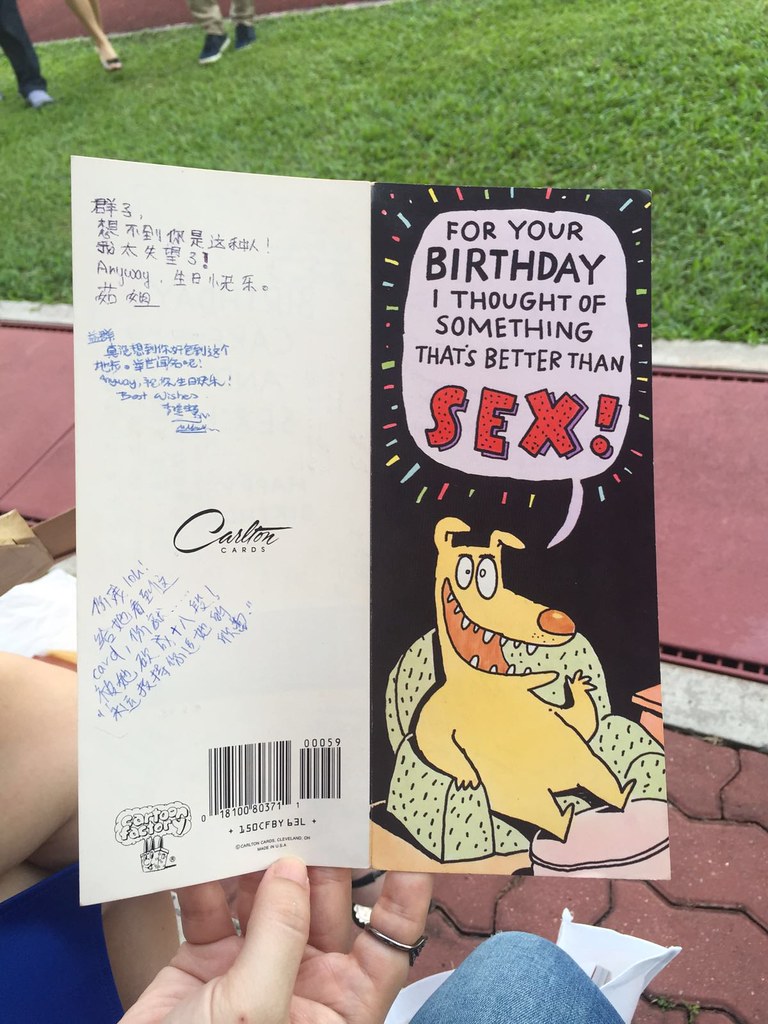 The dinner started REALLY LATE with the 1st dish served at 907pm. But the food overshot my expectations (and I don’t think it was because I was very hungry). For $150, the taste of the food beat many dishes I had at posh hotel weddings. 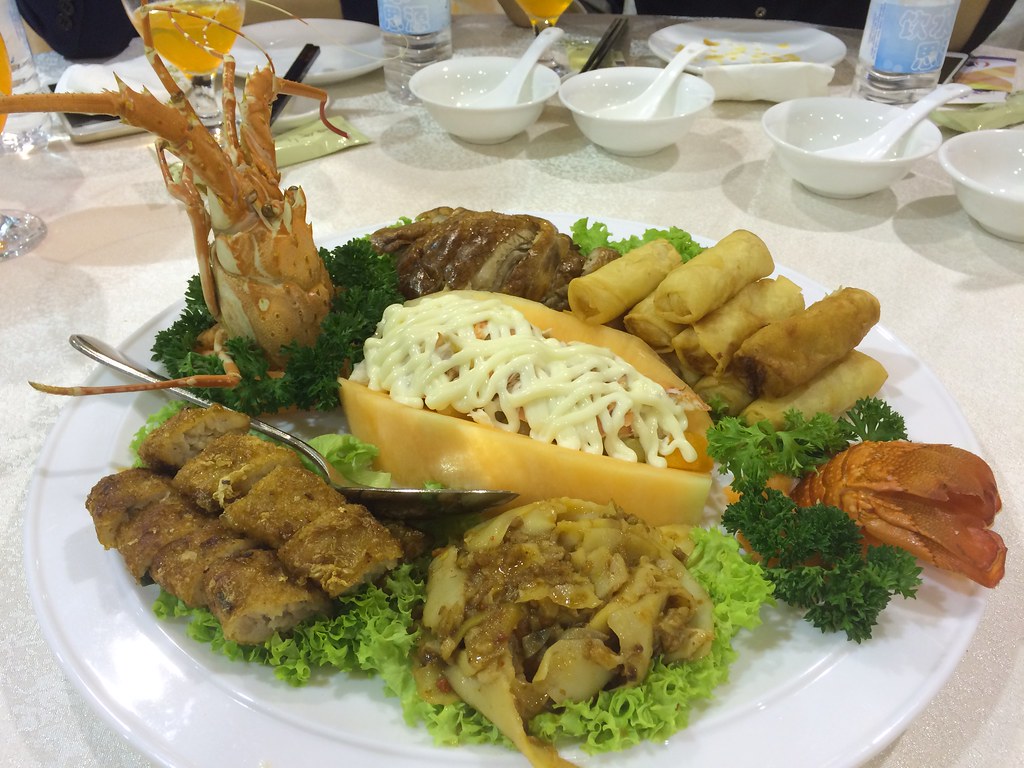 Check out the painting by Edric Hsu! All drawn up during the mass display. Kudos kudos! 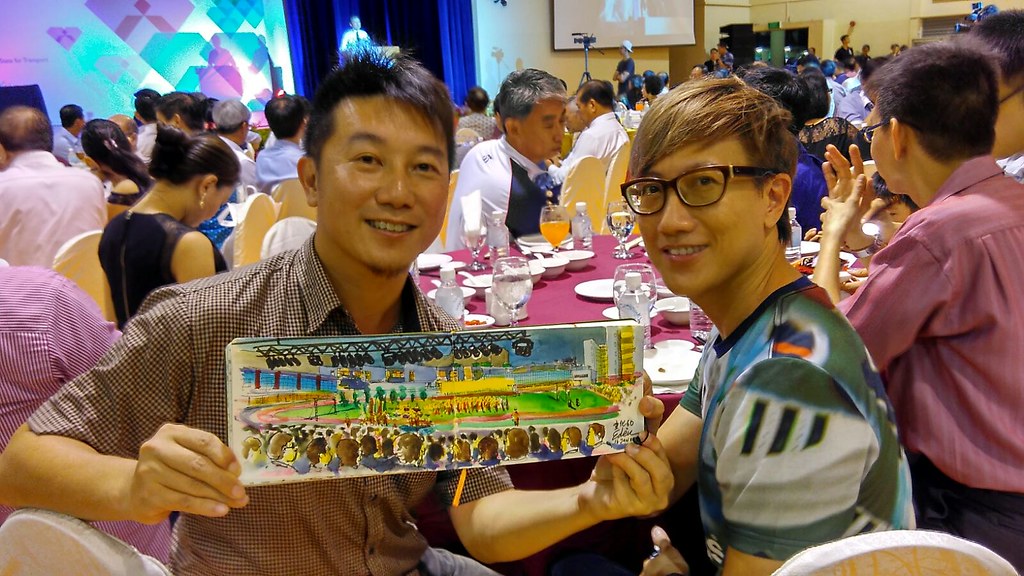 And finally we sang 《青春彼岸》 ……I was really happy that the crowd was appreciative: 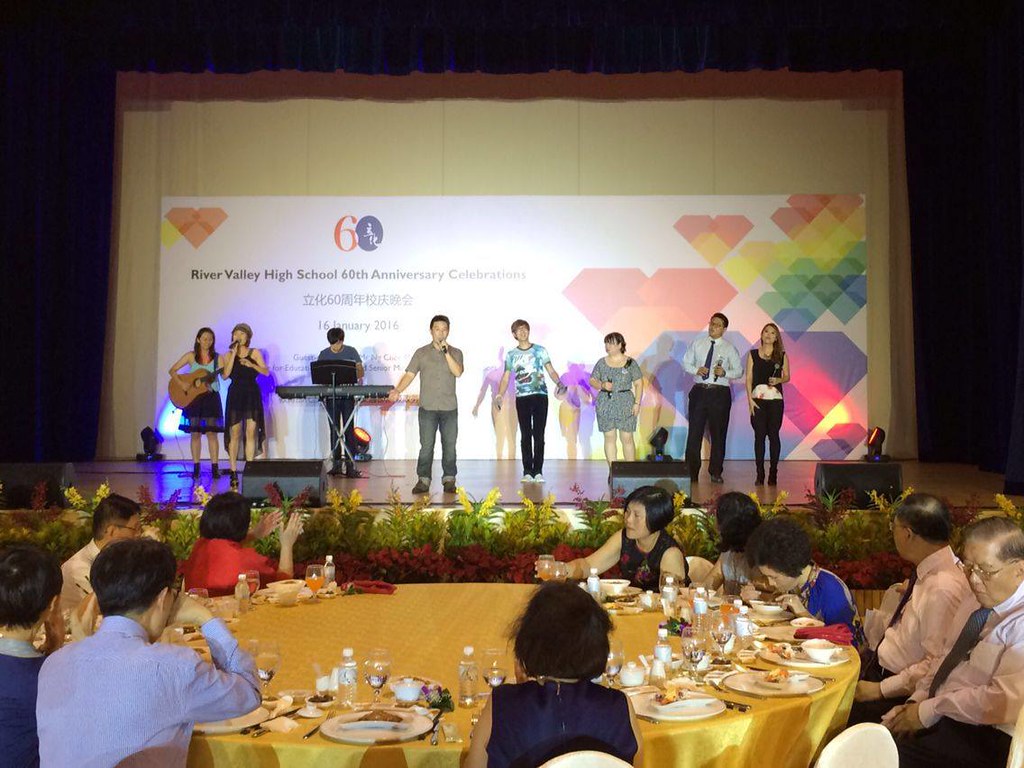 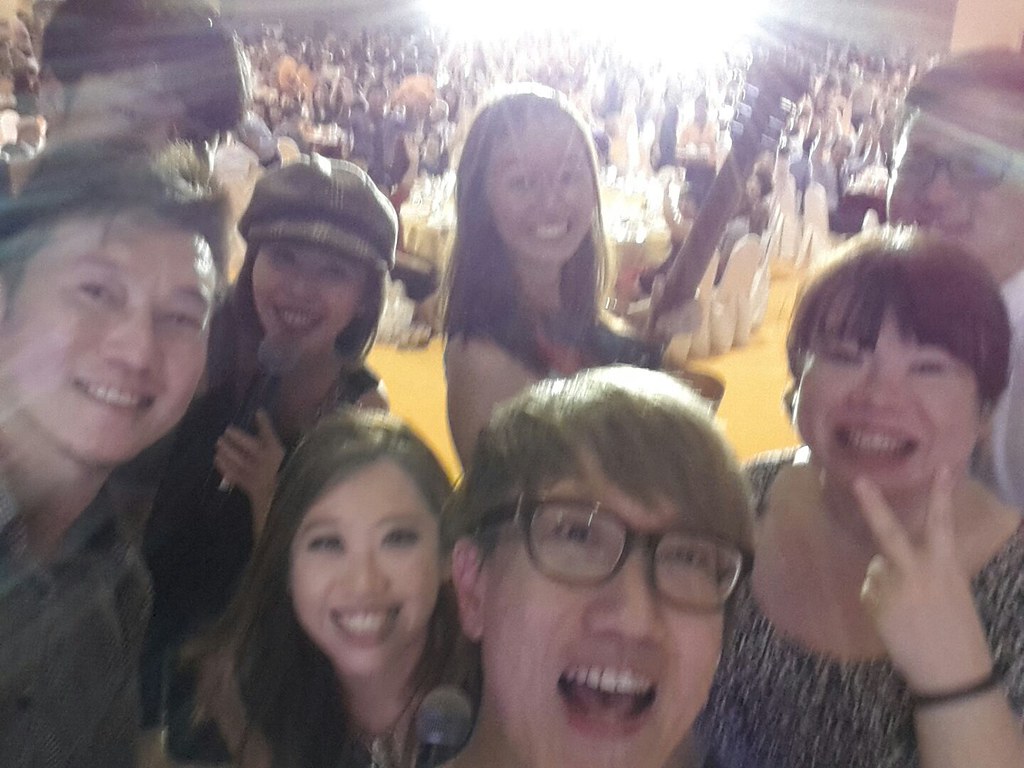 After that, everyone stood to sing the school song. I remember having goosebumps in the middle of it (video): 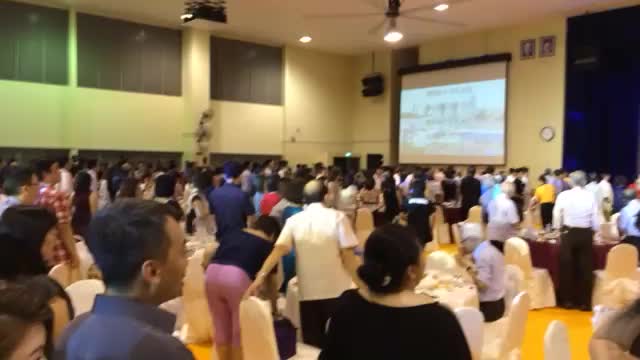 And yes we were from the West Coast campus. Remember the salty-smelling reservoir? I hated it cos I hated running! -_- 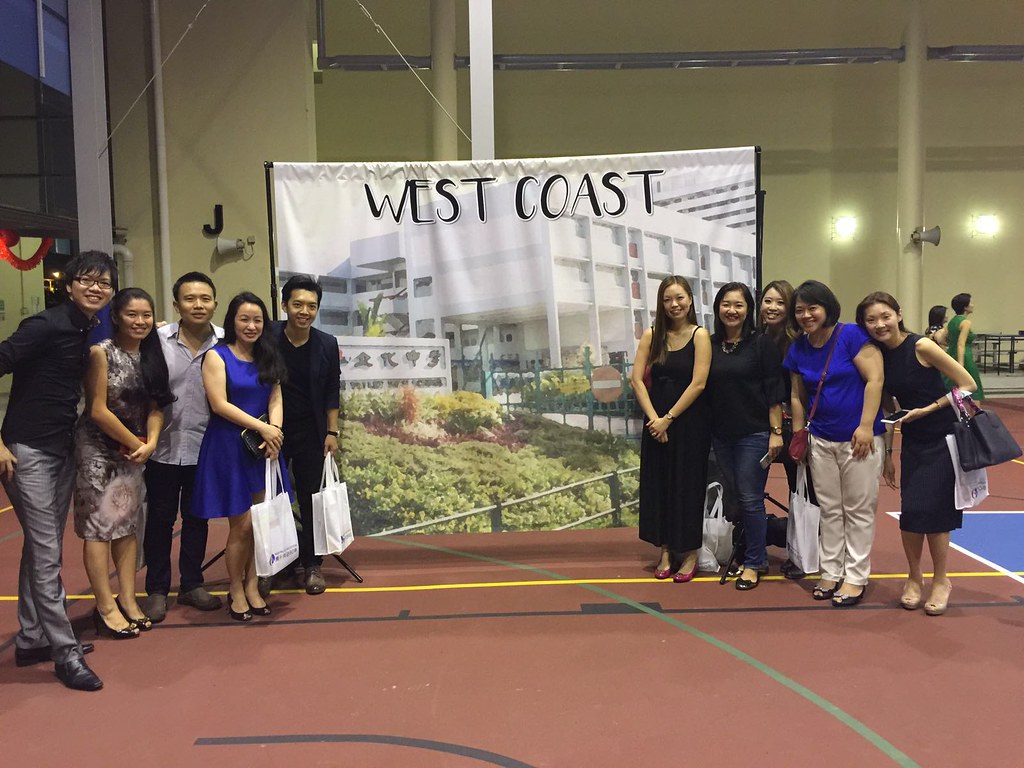 Thinking about it, most of my closest friends came from River Valley High. I wish I could go back in time…but perhaps memories taste good because they are long over. 青春未完待续。。。 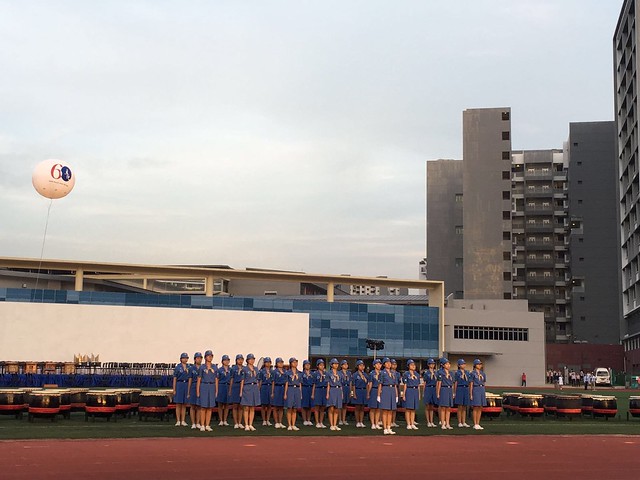 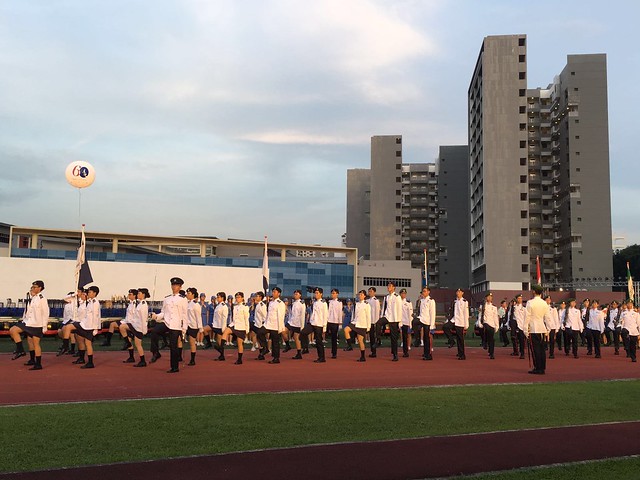 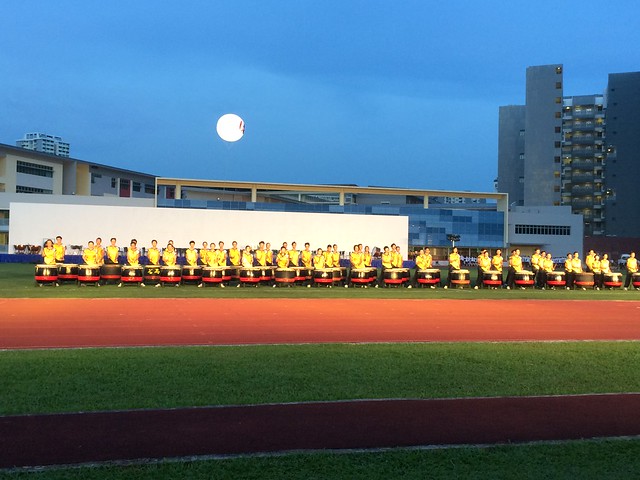 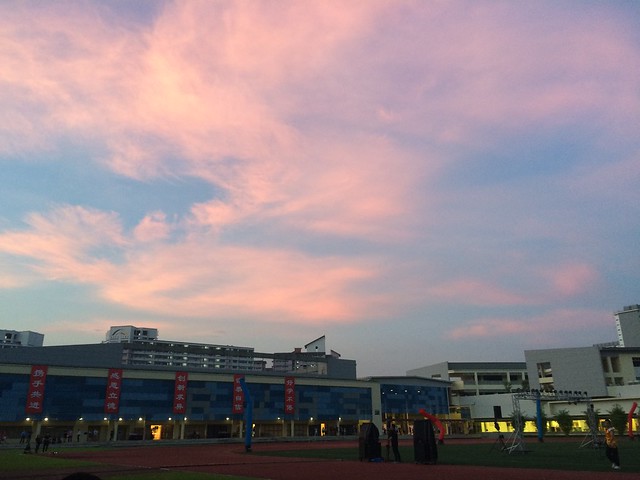 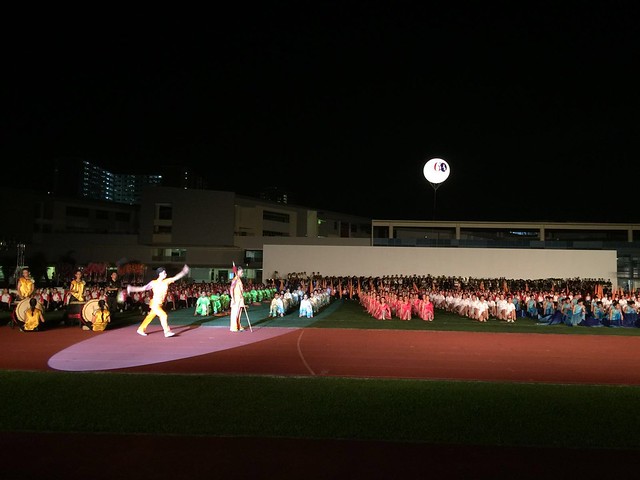 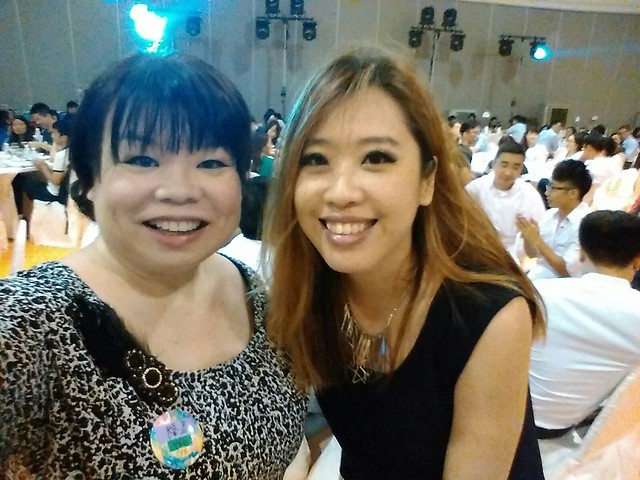