Dogs and babies – we’ve seen so many cute photos and videos of them getting along together but we knew that Buddy wouldn’t take to baby Dave even before Dave was born. We got that answer in a scary way when, as a trial, we had a monkey soft toy masqueraded as a baby in my arms – Buddy growled and whined and jumped to bite the monkey’s tail or leg every single opportunity he got.

Someone told me that dogs don’t get jealous – they are just territorial. In short, Buddy thought that I was his possession and this new love-of-my-life-monkey was taking me away from him.

I’ve failed Caesar Millan for sure. For his code of “exercise, discipline, and affection” (in decreasing order of importance), mine has been “affection, affection and affection”. -_-

So when we carried Baby Dave home for the first time, other than being very very tired, we also had to deal with the real fear that Buddy would attack the baby any chance he got.

The first night when I had to breast feed Dave in the middle of the night, I carried him to the other room, for fear that Buddy would jump onto the edge of my bed and bite the baby’s foot.

Seated in the armchair in the study room and with door ajar, I wasn’t prepared for what I thought was the most heart-wrenching sound I had ever heard from Buddy. It was a howl of despair and exasperation…. and I thought that it sounded like he actually cried too. Honestly, it nearly killed me. It was also very tough to have to keep reminding myself that as much as I love Buddy to bits, this new fragile life (whom I didn’t love as much as I loved Buddy back then), was counting on me.

Here’s Buddy meeting Dave – what you didn’t see in the video was his growling before we laid Dave down into his cot.

So for the first 2 weeks, we were extra vigilant; Buddy could not go near the baby within 2 metres, and if we carried Dave, we had to carry him really high up in case Buddy jumped. Actually he did jump and tried to bite Dave’s feet….unsuccessfully for the first two times. The third time, I let my guards down just a little while breastfeeding on the bed, and before I knew it, Buddy had run across the room, did a leap and took a bite out of Dave’s foot. Dave immediately let out a howl, I let out a big yelp, Buddy dashed away and my husband came stomping over – it was a mad house. Luckily Dave had thick socks over him, and it was an indent and no blood was drawn. I don’t know, but in Chinese we have a saying, 手心是肉，手背也是肉 (both the palm and the back of a hand are flesh – both are dear to me). We did not want to punish Buddy and make him hate the baby even more, but he had to know that what he did was wrong. (Actually he did, cos he did the furtive escape-and-hide knowing that we were furious with him).

I sought the advice of a friend, and we left baby Dave’s soiled clothes on Buddy’s bed. I let him smell and chew and lie on the clothes; i didn’t care what he did with them. I just want him to recognise and own the smell.

Then something strange happened. In the 3rd week, a cousin came to visit me. We just came back and Dave was still in the stroller – when she walked over to the stroller to see Dave, Buddy barked at her. Buddy barked at her?! It was such a small sign but one of huge significance! That’s when we realised that Buddy was beginning to protect the baby!

We continued to monitor for signs, and realised that Buddy was becoming more and more relaxed at the presence of Dave. We slowly allowed him to get closer and closer to the baby. The next stage we went through was Buddy being relaxed around Dave but he would try to bite Dave’s socks off whenever he gets the chance to (for eg. when we left Dave in a rocker chair, Buddy would try his luck). At first we didn’t know that that was the new “progression”, it hit us only when we saw Dave with only one sock, and the other one lying on the floor somewhere far away. It was an interesting progression, and i witnessed it with my own eyes one day – somehow Buddy knew how to gingerly  tug at the sock without biting Dave’s foot. I thought that quite cute – he knew he wasn’t supposed to hurt Dave, but he just had to have the sock! 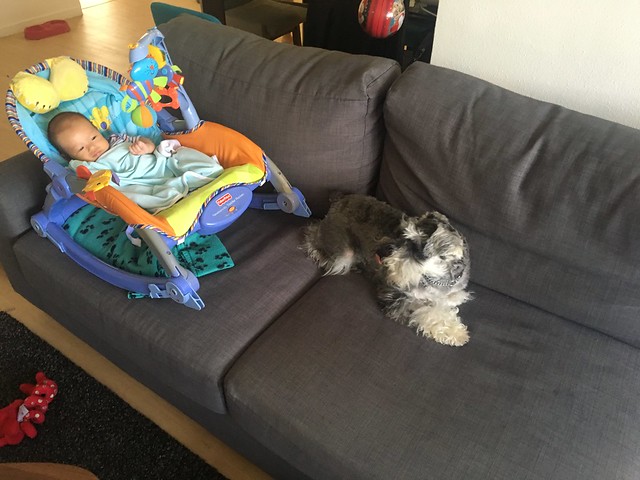 (When they were chilling out) 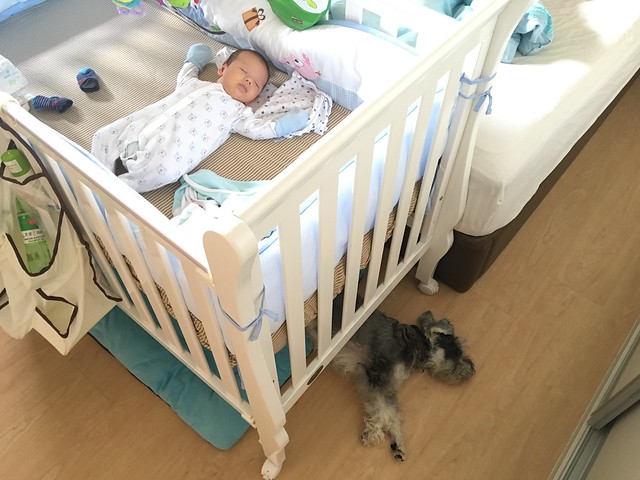 (The new bunk bed in town)

After close to 2 months, we felt at ease leaving Buddy and Dave together (with supervision). What we’re more afraid of now is that Buddy would take the chance to lick him in the face every opportunity he gets! Here’s Buddy & Dave (4 months):

I can’t wait for Dave to grow up and play with Buddy. Dave can now reach out to touch and try to grasp Buddy’s fur. Good luck Buddy, I don’t know what Dave will do to you when he’s older (yet clueless). I wanted to say ‘Don’t say we never warn you’, but the truth is, we can’t speak your language.